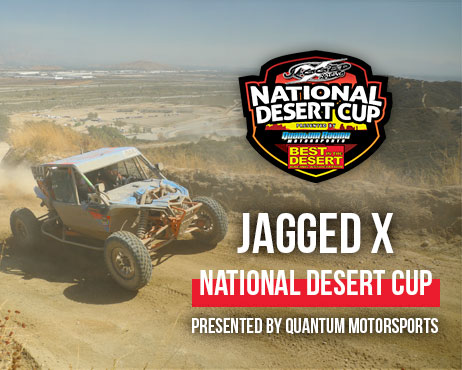 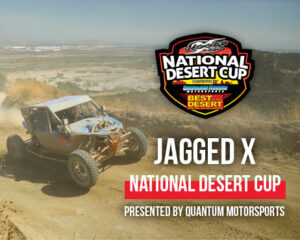 LAS VEGAS, NV (Oct. 1, 2020): Last weekend marked the end of the second to last race of the 2020 Best In The Desert series, and what a series it has been. The Jagged X National Desert Cup Presented by Quantum Motorsports saw temperatures in the low 90’s, smoke-free skies, and a huge turnout for motorcycles, quads, and UTVs.

The 7.8-mile course at the Glen Helen Raceway was new for competitors and featured a variety of off-road challenges between the large in-field motocross section and the Lucas Oil short course track connected together by the infamous West and East Ridges. The setup challenged everyone who attended, reminding many racers of rugged Baja terrain.

The weekend commenced with two full days of tough off-road competition for adult classes. Classes competed Saturday and Sunday in two rounds of seven, six, or five laps, depending on the class, with the lowest elapsed times over the two days determining the overall winners.

To no one’s surprise, the UTV Pro and Unlimited class were two of the most competitive classes of the weekend with the Phil Blurton/Beau Judge team showing everyone the fast way home by winning both days with a combined time of 2:20:04 over Dustin Jones in 2:20:44. Cody Bradbury finished in 2:23:46, Mitch Guthrie in 2:24:13, and Sierra Romo in 2:30:31, rounding out the top five overall after two hectic days of racing.

Saturday’s race required a restart after a huge pile-up leading up the infamous West Ridge. After some quick track work by the Best In The Desert team, the drivers managed the tough course with skill and dexterity. UTV Unlimited was won by Mike De Ley in 2:29:29 followed by Randy Raschein and Michael Isom in second and third place, respectively. The UTV Short Course race was won overall by Larry Heidler in 1:39:28 followed by Braden Baker and Sierra Romo.

The Danny Cooper/Blayne Thompson team won both days to take home the overall win with a combined time of 2:42:10 in the motorcycle/quad class. Clayton Gerstner came in second place in 2:48:10 followed harrowingly close by the Hayden Hintz/Trevor Hunter team in 2:48:13.

Evan Spooner dominated the Quad Pro class finishing in 2:49:18, the fourth fastest overall time of all 65 registered motorcycles and quads of the weekend. Beau Baron finished 2nd on the Quad Pro on his new Polari Scrambler XP 1000 S. THE ultra-competitive UTV Rally Class was won by U987 Mikey Kelly in a combined two-day time of 1:59:53 followed by Brian and Laura Wilson in 2:03:38, James Hill/Erica Sacks coming in third, and Kailee and Steve Olliges coming home in fourth place.

“The racecourse we put together at Glen Helen was very challenging, judging from the comments at the finish. Everyone agreed that the course was tough but fun, and those who came out on top, we salute you,” said Best In The Desert Race Operations Mgr. Jeff Phillips. “In fact, we salute everyone who came to take on the challenge. We especially want to thank Lori Wilson and our hosts at Glen Helen for making the weekend so special. I also specifically want to thank our Best In The Desert staff for all their hard work and dedication. Our team continues to shine and put on the best off-road races in the world.”

“I’m very proud of the job our team did pulling this event together on such short notice,” echoed Best In The Desert CMO Bryan Folks. “Our new Race Operations Mgr. Jeff Phillips did an amazing job overseeing the event and making sure it operated smoothly according to Best In The Desert race standards. We leave Glen Helen looking to finish the season off with a bang at the BlueWater Desert Challenge.”

Overall, the weekend felt like a family get-together with the majority of racers and spectators choosing to camp at the Glen Helen Raceway. The comradery was complete with the Best In the Desert Racer Appreciation Taco Fest and Bench Race Party on Saturday night after the day’s racing when racers and their families were able to socialize and share stories about their experiences that day.

The final race in the Best In The Desert 2020 series will be the BlueWater Desert Challenge on October 22-25, 2020 in Parker, Arizona.