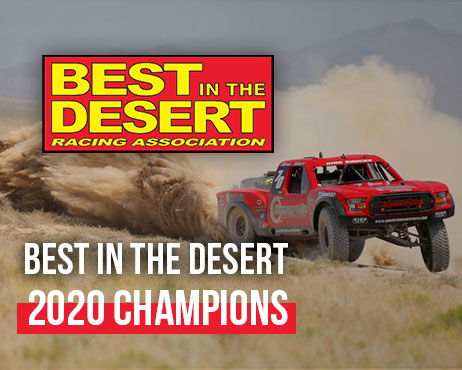 LAS VEGAS, NV (Nov. 6, 2020): 2020 has been a tumultuous year the world over, but the Best In The Desert off-road community has continued to safely come together to compete in one of the most competitive and record-breaking racer turnout series in the organization’s history with an additional record purse of over $667,000 paid out along with contingency and prizes.

October 25, 2020 marked the end of the 2020 race series with the BlueWater Desert Challenge and while racers were congratulated and various event titles handed out following the race, official championship standings had yet to be compiled.

Now, after diligently pouring over results from the year, Best In The Desert is proud to announce the winners of their 2020 Series Class Championships, the Maxxis Triple Crown Series, the Patriot Series, the 4Wheel Parts Youth UTV Series and bestow the Camburg Award.

Calculating final point standings made it clear that Best In The Desert’s 2020 series featured some of the closest racing ever before seen. Racers in all classes except for the Youth Class were allowed to “throw away” one race from the series; a mid-season decision agreed upon during the COVID-19 shutdown to consider racer safety and due to travel restrictions. The Silver State 300 and the BlueWater Desert Challenge, in turn, were double points events, which affected overall series results.

Starting at the top with the most coveted prize in all off-road racing, a Trick Truck Class Championship, the #70 Kevin Thompson/Harley Letner team came home champs followed by #24 Adam Householder. The Thompson/Letner team had an incredible year running consistently near the front in every event with top finishes and ended up taking the class. Long-time Best In The Desert racer Householder finished the season 14 points behind despite a solid win at the King Shocks Laughlin Desert Classic. Rounding out the podium was “The Ambassador” Steve Olliges who had one of his best seasons ever and was fun to watch all year.

The Trick Truck Class was an example of how fickle off-road racing can be. Jason Voss came into the final race of the season with a strong points lead to take the overall class win and the Maxxis Triple Crown. A tough crash at the start of the BlueWater Desert Challenge meant championship and crown titles would be out of reach. Voss’s crash was an example of how hard these racers push themselves to be the best in the sport and to remind racers that overall glory can come at a price. The off-road racing community as a whole wishes Voss a speedy recovery and hope to see him back at the races in the 2021 series.

Another hotly contested class was Class 6100. Kyle Jergensen, Ray Griffith, Travis Williams, and Troy Messer were close competitors over the year, making the class always exciting to watch. In the end, Jergensen took the Best In The Desert Class 6100 Championship with his epic win at the BlueWater Desert Challenge. A mere 28 points separated Jergensen, second-place Griffith, Williams in third, and Messer in fourth place in the end of one of the toughest class battles of 2020.

Next announced was the winner of the UTV Pro Production Class, another challenging and ultra-close competition with Polaris driver Seth Quintero taking the win over Kaden Wells by only a single point. Corbin Wells took third place and Dominick Gaglione fourth place, respectively, for the overall series championship.

To round out the UTV Classes, Phil Blurton ended up winning the UTV Turbo Class over Dustin Jones and Mitch Guthrie Jr. while Michael Isom bested Randy Raschein 525 to 521 to win the UTV Unlimited Class Championship. Josh Shelton and Robert Van Beekum completed the class in third and fourth place.

Keeping within the theme of 2020, Class 1500 also came down to an epic battle between Michael Frye and Brandon Bailey with Frye coming out on top by just three points. Sam Berri, who led the class coming into the BlueWater Desert Challenge, finished in third after suffering motor problems in Day 1 racing scoring a DNF and a poor finish overall at the crucial double points event. Nevertheless, this was one of the most competitive classes of the year.

The 4 Wheel Parts Youth Series was a shining example of the future of the sport, with young off-road competitors hitting the courses hard ready to fill bigger boots soon enough. Series standings put Dallas Gonzalez ahead to win the UTV Y 1000 Class Championship followed by Ethan Groom. TJ Siewers was the UTV Y 170 Class Champion followed by Jaxon Leaming and Ryder Van Beekum. In the UTV Y 250 competition, Chaden Zane Minder was the series champion with Travis Sailee coming home second place. The UTV Y 570 Class was won by Kendall Falker by just three points, 246 to 243 over Chase Mankin. Finally, in UTV Y 170 Mod racing, Deegan Gonzalez was the class champion with Chase Mankin and Braden Krah rounding out the podium in second and third, respectively.

Maxxis Triple Crown winners of the four different divisions include Kevin Thompson/Harley Letner in the Car/Truck Unlimited Division earning a $25,000 bonus for the season; Kyle Jergensen in the Car/Truck Limited Division earning a $7,500 bonus; Phil Blurton in the UTV Division with another $7,500 championship bonus and the Hayden Hintz/Trevor Hunter motorcycle team winning the MC Division earning a $3,500 bonus. All together, $337,500 in event and series championship bonuses were paid out through the Maxxis Triple Crown alone. This money was awarded on top of Best In The Desert normal series payout bringing the total number at Best In The Desert 2020 races close to $700,000.

Last but not least Ray Griffith was the winner of the 2021 Camburg Award for the racer that completed the most races in the shortest elapsed time. In 2020 four races were counted towards this award with the Silver State 300 being counted as a throw away event due to COVID-19 issues.

Full series results will be posted by Wednesday, November 11, 2020.

A Year-End Awards ceremony is being planned for December 5th, 2020 in Las Vegas, Nevada. More details to follow. All Class Champions and Series Contenders will be invited.