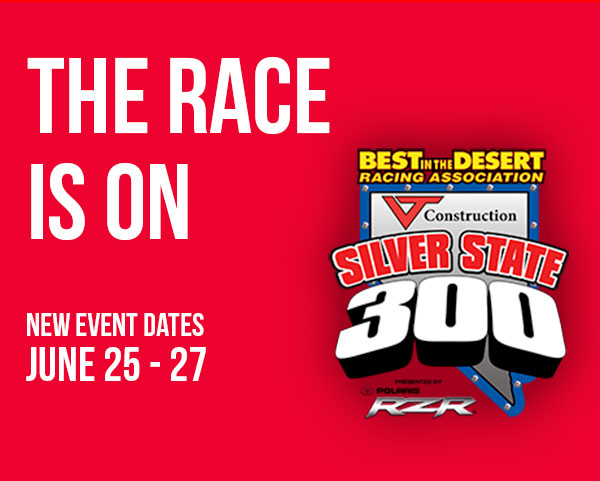 The Race Is On: Dates Confirmed for Best In The Desert’s VT Construction Silver State 300 Presented by Polaris RZR 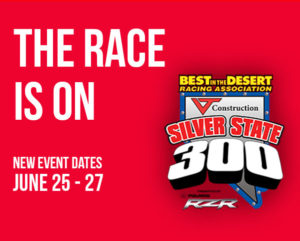 LAS VEGAS, NV (MAY 13, 2020): After significant deliberation and input from racers, sponsors, staff and other parties connected to the series, Best In The Desert is moving forward with the VT Construction Silver State 300 Presented by Polaris RZR on June 25-27, 2020 in Alamo, Nevada. The decision was largely based on survey results following the Virtual Town Hall with nearly 300 respondents and 92% confirming “Yes” they are ready to go racing.

“We are super excited to get back to racing and want to thank everyone for taking time to fill out the survey,” commented Best In The Desert CMO Bryan Folks. “We couldn’t have made this decision without the support of the racing community and it’s just another indication of why off-road racers, and in particular Best In The Desert racers, are the most dedicated racers on the planet.”

The Bureau of Land Management (BLM) has approved the race to take place near Alamo, Nevada as previously planned but with no pre-run, in order to adhere to social distancing guidelines. Additionally, Best In The Desert is working with a new host hotel to hopefully include all sponsors and vendors in the Event Expo and will announce more information in the coming weeks.

The new host hotel has been confirmed as Boulder Station Hotel and Casino in Las Vegas. While Best In The Desert is still waiting to hear confirmation on capacity, protocol for the Event Expo, and room reservations, they expect to share that information as soon as it is available. However, potential racers can begin to consider travel plans.

The VT Construction Silver State 300 Presented by Polaris RZR will be a 300-mile point-to-point race starting just north of Alamo, Nevada, and is open to bikes, quads, cars, trucks, and UTVs.

As stated at the beginning of the 2020 American Off-Road Racing Series, the VT Construction Silver State 300 presented by Polaris RZR will be a double points race for all classes. However, the current points system will see updates. Due to the recent events, Best In The Desert is allowing a throw-away race for the 2020 season. This throw-away race can be used for previous races that have already taken place in 2020 or used for the remainder of the series.

“We feel that adding a throw-away race is necessary to adapt to the current conditions and not penalize any team that may still be affected due to travel restrictions,” stated Race Operations Manager Donald Jackson. “Racers and teams began the 2020 season expecting to be able to compete for a class championship. With travel restrictions potentially still in place, we need to be fair to all competitors and give them a chance to still go for that class championship regardless of their geographic location.”

The decision to hold the VT Construction Silver State 300 Presented by Polaris RZR amidst COVID-19 anxieties is not one that Best In The Desert staff, volunteers, and race sponsors take lightly. There will be heightened sanitation precautions and recommendations in place to ensure the safety and sense of security for staff, racers, sponsors, and fans. Best In The Desert will be communicating additional safety measures as the event gets closer.

Best In The Desert is excited to get back to racing and is confident that they can do so safely with the support of BLM and the Boulder Station Hotel and Casino Group. This decision has been met with an overwhelmingly positive response from sponsors, volunteers, racers, and fans leading to the notion that everyone can participate mindfully.

It’s time to “Go Racing” but to do so conscientiously. Best In The Desert will update followers with more information as soon as decisions are internally made.

Competitors can enter the race here.