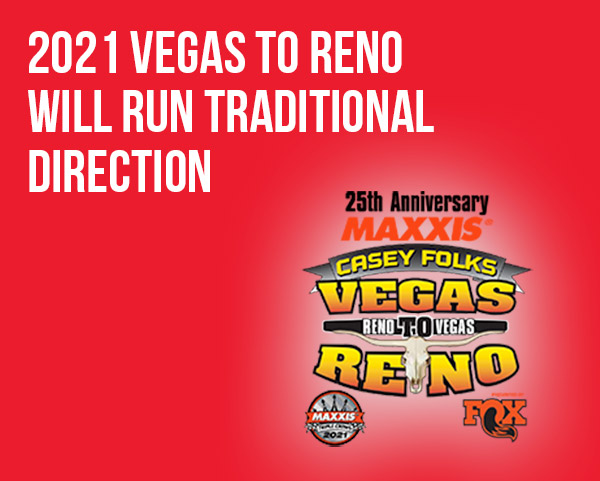 FOR IMMEDIATE RELEASE: LAS VEGAS, NV (April 14, 2021): Originally planned to run from Reno to Las Vegas to celebrate the 25th anniversary of Best In The Desert’s most well-known race, the Maxxis Tires “Casey Folks” Vegas to Reno Presented by Fox will run as it has in the past from Las Vegas, Nevada to Reno, Nevada.

Due to recent issues with residents of Beatty, Nevada, the Bureau of Land Management (BLM) is requiring all off-road events in 2021 to start or finish at Bonnie Claire. As a result, Best In The Desert has decided to run the Maxxis Tires “Casey Folks” Vegas to Reno Presented by Fox in the traditional direction in order to improve the racing conditions and have better facilities at the finish line. The race will take place from August 11 to August 15, 2021.

Despite the new start location, the race will still run a full 500 miles including several minimally-used previous routes from past events.

“The challenges of hosting off-road races the scale of Vegas to Reno continue to rise but Best In The Desert was built on a never say ‘quit’ attitude,” commented Best In The Desert CMO Bryan Folks. “Changing the direction back to its traditional direction was an easy call to make. We can start a point-to-point event practically anywhere, but when it comes to the finish line experience we want it to be special. Racers and fans can expect a long, tough, challenging racecourse, one that is deserving of the title ‘Longest and Largest Single Day Off-Road Race in the U.S.’”

“We’ve been closely monitoring the situation in Beatty, working with the local government, chamber of commerce, and BLM to arrive at the best solution for all this year,” said Best In The Desert Race Operations Mgr. Jeff Phillips. “We look forward to getting back to normal in 2022. Beatty, Nevada is an important partner to our series and we look to return in 2022.”

Racers, spectators, and volunteers should make note of the race direction change in order to plan accordingly. Best In The Desert will announce a host hotel in Las Vegas for tech and registration and a hotel in Reno in the weeks ahead.

Inquiries or concerns can be directed via Best In The Desert’s contact methods found here.

The Vegas to Reno race has been a staple event in the Best In The Desert Racing Series since 1996. As the longest single-day off-road race in the United States, this point-to-point competition is one of the most challenging ultra-distance competitions in the world. Off-road enthusiasts prepare their vehicles all year to perform under the hot Nevada sun, ready to battle extreme elements and be crowned as the winner of the V2R.