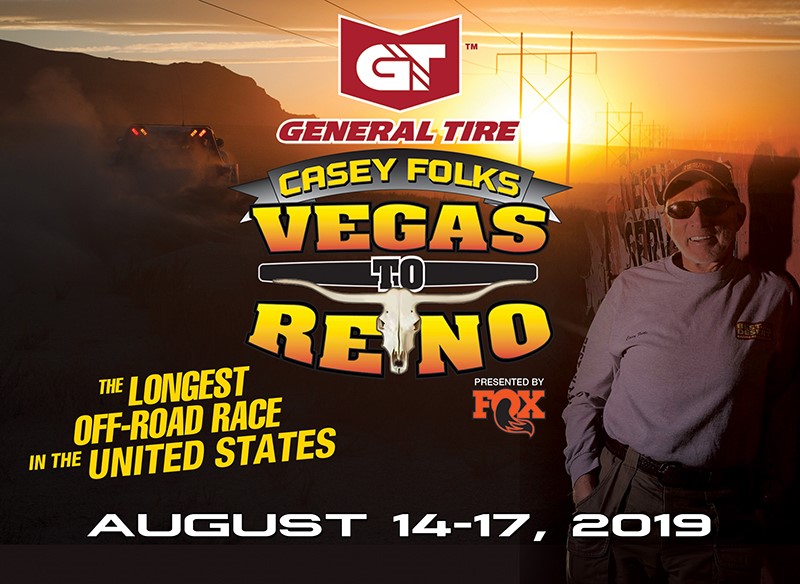 CASEY WOULD BE PROUD

Las Vegas, NV July 30, 2019      “The Longest Off-Road Race in the United States” now carries a new name in honor of Casey Folks, the founder of Best In The Desert.  Initially run in 1996, the Best In The Desert “Vegas to Reno” race marked the first time Casey expanded his series to include car, truck, motorcycle and quad classes in one of his events. It represented the culmination of his vision and passion for off-road racing. This year’s running of the General Tire Casey Folks “Vegas to Reno” presented by FOX runs from August 14 through August 17.  More than 360 race teams have signed up for the drawing for this year’s 23rd running of the “Vegas to Reno” race surpassing all previous records for pre-entries. It demonstrates the strong support the off-road racing community continues to give Best In The Desert, the largest and still growing, off-road racing organization in North America.

For 2019, the General Tire Casey Folks “Vegas to Reno” presented by FOX is a traditional single race day format. At over 500 miles in length, the race will start in Beatty, Nevada, and end just south of Reno in Dayton, Nevada, home of Nevada’s first gold discovery. Elevations along the course vary from around 3,000 ft. to over 7,900 ft. Temperatures will range from the high 90’s during the day to the low 40’s at night through the higher elevations. From Beatty, the course travels north past many towns that were rich in Nevada’s silver and gold rush mining history, including Goldfield, Tonopah, Hawthorne, and Rawhide.

Race-related events get started Wednesday, August 14, when the Trick Trucks, Class 1500 Unlimited Cars, and Class 6100 face off for starting order at Time Trials. Here the Trick Trucks and Class 1500 compete head-to-head for the $1000 “Team Ford Pole Award” . Class 6100 cars compete for the “Alexander Ford Fastest Qualifier” $1000 award.  Both qualifying events offer the chance to be the first vehicles off the line in their respective classes.

Casey Folks “Vegas to Reno” activities continue in Las Vegas on Thursday, August 15, for Racer Registration, Technical Inspection, and Contingency. Best In The Desert thanks our host hotel, Texas Station, where these proceedings will take place. Tech and Contingency are located in the parking lot of the Texas Station, where race fans will have the chance to see an amazing collection of high-tech desert race Cars, Trucks, Motorcycles, Quads, and UTVs specially built for racing. Plus, hundreds of the off-road and racing industry’s top manufacturers will have their latest products and accessories on display for everyone to check out.

Racing at the  2019 General Tire Casey Folks “Vegas to Reno” presented by FOX starts early Friday morning, August 16, in Beatty, about 100 miles north of Las Vegas. First off the line will be the Motorcycles followed by the Quads. After a substantial delay for safety reasons, the Car, Truck and UTV classes will head out on their quest to reach the finish line at the Dayton Events Center with hopes of a class victory. Due to the long distance of the racecourse, a 24-hour time limit has been established, so racers may still be coming across the finish line well into Saturday morning, August 17. The Awards Presentation will take place Saturday evening, August 17, at the Sparks Nugget in Reno, Nevada.

LIVE TRACKING
For those of you that can’t make it to the event, follow us on the
Best In The Desert website on LiveTracking.
Just click https://bitd.com/live-tracking/