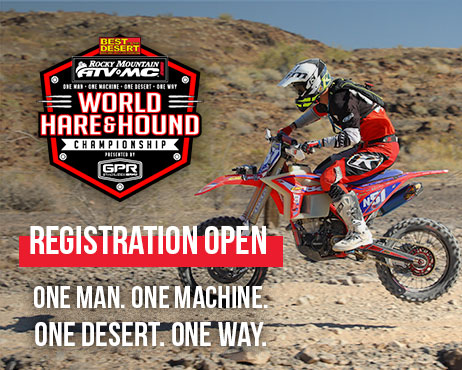 FOR IMMEDIATE RELEASE: LAS VEGAS, NV (Apr 5, 2021): Best In The Desert registration will open on April 7, 2021, for the upcoming Rocky Mountain ATV/MC World Hare and Hound Championship Presented by GPR in Tonopah, Nevada on May 21-23, 2021.

“We are excited to announce the opening of sign-up for the upcoming Rocky Mountain ATV/MC World Hare and Hound Championship Presented by GPR,” commented Best In The Desert CMO Bryan Folks.  “We’re looking forward to a great event and have worked very hard to keep entries affordable for such a prestigious race. Pro Class entries are set at $485, AM/EX entries at $275, and Youth Entries from $60 to $90. The race itself will be amazing with some incredible terrain. In addition, we have plenty of other activities connected to the event including our Event Expo and a post-race awards party at the Tonopah Station on Saturday night.”

A complete complement of Youth race classes for 50cc, 65cc, and 85cc motorcycles will be held with the 50s and 65s competing on a special course prior to the start of the main race. The 85s will get to race the actual big bike course and experience a point-to-point race with the finish line located some 52 miles off the start.

Another interesting twist connected to the event is that three-time AMA National Hare and Hound Champion Russell Pearson will serve as the “hare” for the event. Pearson will be given a few-minute head start with a bounty on his head of $1,000 should anyone catch him before Pit 1 and $500 if anyone catches him before Pit 2, 52 miles into the event. This added incentive comes on top of a guaranteed purse of $6,000 for the top Pro finishers in both the Men’s and Women’s classes.

“The Rocky Mountain ATV/MC World Hare and Hound Championship Presented by GPR will be a very special event,” adds Race Operations Mgr. Jeff Phillips. “We are pulling out all the stops and hope to create an event that harkens back to the glory days of desert racing. We invite everyone to come out to Tonopah and join us.”