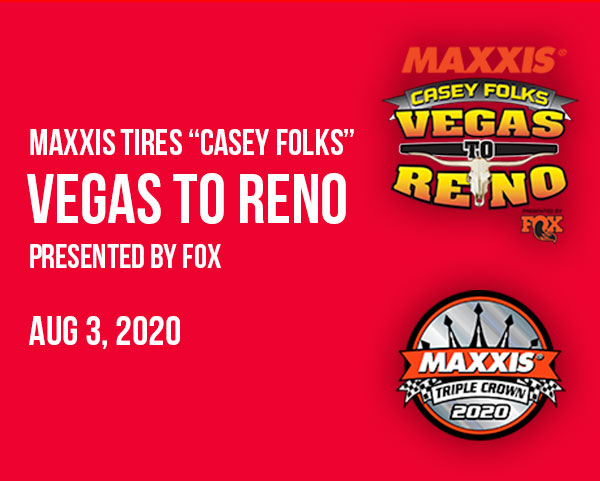 LAS VEGAS, NV (Aug. 3, 2020): After lengthy discussions and the submission of a ground-breaking COVID-19 Safety Plan, the BLM is officially issuing the permit for the 24th Annual Maxxis Tires “Casey Folks” Vegas to Reno Presented by Fox. The race will run as originally scheduled Aug. 12 -15, 2020. A record field of entries including all the top names from every segment of the sport will be competing, eager to win the famously-grueling 550 point-to-point race from Las Vegas to Reno, Nevada, the longest off-road race in the United States.

The BLM is granting the permit under the condition that Best In The Desert and its racers adhere to additional COVID-19 mitigation guidelines. These conditions will be spelled out in greater detail in an email to all racers entered in the event within the next couple of days.

With the 2020 Best In The Desert race season just past the halfway point, fans can expect some close racing as competitors challenge for series points championships and bragging rights as champion of this legendary off-road event.

“We are happy to report the race will run as scheduled,” said Best In The Desert CEO Daryl Folks. “We sincerely appreciate the work done by the Nevada BLM State Office and the Battle Mountain BLM District Office along with their hard-working team to help us arrive at this point. It’s only fitting that the race named after our father and the founder of Best In The Desert will be run after all. In the end, it came down to the fact that we were able to prove that our racers know how to follow rules and will comply with the special measures we have put in place to make sure we run a safe race and respect the special COVID-19 safety protocol we’ve established.”

“I too am very grateful for all the hard work and cooperation by the BLM,” said Best In The Desert CMO Bryan Folks. “I cannot stress enough how crucial it is for the racing community to follow the new COVID-19 guidelines that will be set forth in the next announcement. The future of Best In The Desert depends on everyone putting aside their personal views and following what is being asked of us. I feel like this is an opportunity for the off-road community to come together and shine and prove that we can follow the rules. We want to thank our racers, sponsors, and staff for their support as we worked through this situation. Finally, we would like to thank our Nevada elected officials and for many other prominent voices for also supporting our event.”

Best In The Desert Race Operations Manager Donald Jackson added, “It has been challenging from all fronts to get the permit approved to run on the original date. There were many obstacles to overcome but ultimately it was a huge team effort that got us to this point. I want to especially thank all those that took time to write letters of support, make phone calls, give medical advice and help us put together a solid COVID-19 mitigation plan especially Medical Director Doc Lippmann, Silver State Offroad Alliance (SSORA), and the Bureau of Land Management (BLM). Without all of us collectively working together, we wouldn’t be able to see all the best off-road racers go head to head in the ‘Longest Off-Road Race in the United States.’”

Here are just a few of the top names that are entered:

The 2020 Maxxis Tires “Casey Folks” Vegas to Reno Presented by Fox will be the 24th running of the annual event since legendary founder Casey Folks first organized the 550-mile challenge in 1996. This year’s race also marks the second out of three races of the Maxxis Triple Crown which means there is $67,500 in additional prize money on top of the Best In The Desert money awarded to winners of the Unlimited Car/Truck, Limited Car/Truck, MC/Quad and UTV classes.

Fans can follow their favorite racer on race day on Best In The Desert’s website https://bitd.com/live-tracking/ or by visiting RacingTrax. In addition, Best In The Desert will be posting a constant stream of posts from Time Trials and the race including extensive LiveStreams over Facebook of key action from the event. An updated itinerary will be announced in the weeks ahead. As the off-road racing community looks forward to meeting again in the desert with engines roaring, Best In The Desert staff and race organizers are hard at work behind the scenes to coordinate the best Vegas to Reno event in years.

What: Maxxis Tires “Casey Folks” Vegas to Reno Presented by Fox
When: August 12-15, 2020
Where: Race starts near Beatty, NV and ends in Dayton, NV