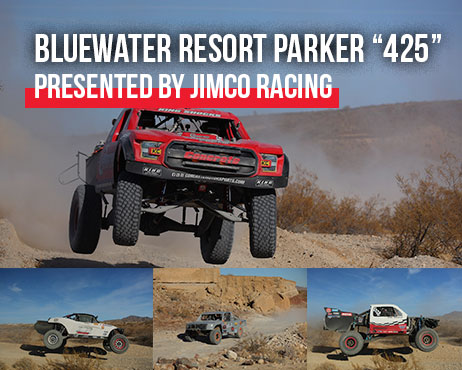 FOR IMMEDIATE RELEASE: LAS VEGAS, NV (Jan. 18, 2021): Notorious off-road racing organization Best In The Desert is coming off of its first race of the 2021 season, the BlueWater Resort Parker “425” Presented by Jimco Racing. Judging from the reaction of those in attendance, it may very well have been Best In The Desert’s most successful Parker “425.”

As the dust settled on Saturday, January 16, 2021, it was clear that Best In The Desert organized a truly great event for its racers despite last-minute course alterations and COVID-19 regulations. Moving the Start/Finish and main pits to Shea Rd. seemed to be welcomed by the racing community and created an atmosphere of “old-school” off-road racing. The organization credits its incredible success to its racers, fans, staff, volunteers, the BLM, Colorado River Indian Tribes (CRIT), and the people of Parker, Arizona for adhering to protocol and acting respectfully while participating in the BlueWater Resort Parker “425” Presented by Jimco Racing.

Two full days of racing were preceded by the Parker Downtown Experience on Thursday, January 14, 2021, where participants could admire the vast array of race vehicles and wander between Best In The Desert vendors browsing products. The town of Parker, Arizona has been hosting Best In The Desert races for years now and is no stranger to welcoming the racing community with open arms.

The action got started on Friday, January 15, 2021, with racers tackling the 126-mile-long course starting just off Shea Rd., the traditional starting location for the original Parker “400.” Wheeler Morgan from Brawley, California took the highly-anticipated Class 1000 contest with an overall time of 5:53:38 over three laps totaling just shy of 400 miles due to course alterations. Wheeler was followed by Andrew Yurcho in second place and Bret Jeffers in third place in both class and overall.

The 5000 Class was another hotly-contested event on Friday with Cade Garcia of Santa Fe Springs, California finishing first in 6:21:29 with Troy Grabowski hot on his heels coming in with 6:22:13. Other winners from the day included Rob Seubert in 6:37:23 taking Class 4700, and Randy Merritt taking Class 7200, keeping his streak alive.

Another highlight of Friday’s racing was the TrophyLite Class who were using the BlueWater Parker “425” Presented by Jimco Racing as the final round of their 2020 points season and the start of 2021. With so much at stake, the racing was particularly noteworthy. #6021 Dave Taylor led the first lap followed by #6012 Greg Bragg and #6081 Larry Schmueser. Going out on the final championship lap, Schmueser led followed by Taylor and Bragg about eight minutes back. The battle was hot and furious and came down to attrition with the leaders both experiencing flat tires near the finish and limping across the line. Bragg took the win followed by Dave Taylor and Larry Schmueser. As for the 2020 series championships, Patrick Whitt took home the much-coveted TrophyLites season championship with 582 points, beating Larry Schmueser by a single point with 581 and Jason Cobb in third with 551. TrophyLites is an amazing class on its own with some of the closest racing in the sport.

The Trick Truck contest on Saturday was also an event that many looked forward to and it did not disappoint. 18 of the most recognizable racers in the sport vied for top spots including BJ Baldwin, Tim Herbst, Kyle Jergensen, Adam Householder, Steve Olliges, Sam Baldi, Tracy Graf, and the Letner/Thomson team. Due to the lack of Time Trials, luck of the draw for the start position was a major factor in how the race evolved.

BJ Baldwin set a strong pace for the first two laps with the Letner/Thompson team right in the mix and Steve Olliges, who was first off the line taking advantage of the “clean” air, giving them a run for their money. However, the infamous Parker racecourse soon began to show its true technical features with many top names falling behind.

In the end, the reigning Trick Truck series 2020 champions, Harley Letner and Kevin Thompson of Concrete Motorsports took home the overall win with a time of 5:35:27 with Adam Householder coming in an impressive second place with 5:40:55, showing he is a top contender. Perhaps most impressive was newcomer Trick Truck Class competitor, but reigning Class 6100 champion, Kyle Jergensen rounding out the podium in 5:52:42 overall who raced with his Class 6100 spec motor since his Trick Truck motor did not show up in time.

“What an amazing weekend,” commented Best In The Desert Race Operations Mgr. Jeff Phillips. “This weekend turned out better than we could have hoped for in our wildest dreams. A big thank you needs to go out to all our partners including the BLM, the Town of Parker, the CRIT, and all our sponsors who support Best In The Desert. Most of all, I want to thank our racers who all continue to support us and keep us #1 in off-road racing. The best part for me and the Best In The Desert staff was seeing all the smiling faces and truly happy people just to be out racing.”

“Despite all the challenges and last-minute adjustments the 2021 Bluewater Parker ‘425’ Presented by Jimco Racing went about as perfect as possible from a race operations perspective,”  added Best In the Desert Co-Owner Bryan Folks. “To see all the eager faces and grateful race teams at the finish line made it all worthwhile. This was a real team effort by the Best In The Desert staff, and I couldn’t be prouder of the job they all did putting this event together. We are off to a great start in 2021 and continue to be blessed by the support of the racing community. We look forward to our next event, the Tensor Tire Parker ‘250’ in just over a month.”

The BlueWater Parker “425” Presented by Jimco Racing marked the first round in the 2021 Maxxis Triple Crown Series. This year’s series winners will be based on their performance over the course of the season at Maxxis Triple Crown Events which is expected to pay out another large sum of money.