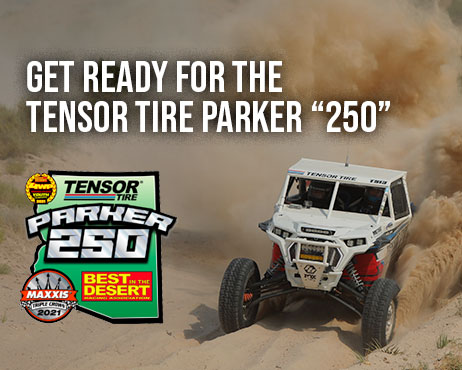 Best In The Desert Returns to Parker, Arizona for the Tensor Tire Parker “250” ; Huge UTV Field Joins Motorcycles and Quads for First Round of 2021 Season

FOR IMMEDIATE RELEASE: LAS VEGAS, NV (Feb. 8, 2021): While Best In The Desert continues to appreciate the incredible success of its first race of the 2021 series, the BlueWater Resort Parker “425” Presented by Jimco Racing, the organization is gearing up to return to Parker, Arizona for the Tensor Tire Parker “250” scheduled for February 18-20, 2021.

The Tensor Tire Parker “250” marks the first race of the Best In The Desert 2021 season open to UTVs, motorcycles, and quads. As such, the biggest names in the sport are expected to compete as seen with 250 vehicles entered in the drawing for start positions on February 3, 2021. The race will run four laps around the 63-mile course which includes notorious features such as “Osbourne Wash,” “Midway,” and the “Rock Pile.”

The Rally Class will also be exciting to watch with 29 racers entered including Honda’s Jamie Campbell and Gold Rush star Rick Ness making his way down from the snowy north to give it a go in the desert. Ness’s experience will be documented to be used as part of a new television series on the Discovery Channel later this year.

The Motorcycle Class will also see a strong field of racers including defending 2020 Best In The Desert Open Pro series champs Hayden Hintz and Trevor Hunter who will battle it out with Nic Colangeli, Jeff Trulove, Nic Garvin, Danny Cooper and Beta factory rider Zane Roberts, while the Quad Class will be led by the Sean Loodus/David Scott team.

Not to be left out will be the Best In The Desert Women’s Motorcycle Class with Kimberley Loppnow leading the way with the W1 team, Kenzy Smith and Felicia Webb, W7 Britney Gallegos, and the W19 Jaycee Jones, Daiania Trapp, and Cindy Lowerre team not far behind.

Starting the weekend strong will be the young racers of the 4WheelParts Youth Series on Friday, February 19, 2021. A determined group of future off-road racing stars will be ready to show the veterans what they are made of. All in all, the weekend is shaping up to be a spectacular example of what fans, racers, and spectators have come to expect from a Best In The Desert event.

“We look forward to welcoming all off-road racing fans back to Parker, Arizona for the Tensor Tire Parker ‘250,’” commented Best In The Desert Co-Owner Bryan Folks. “Once again, the town of Parker, our sponsors, the Colorado River Indian Tribes (CRIT), and the BLM have all come together to help us host this amazing event, and judging from the public’s response the last time we were here, we are in for a great weekend of racing. We invite everyone to join us for the Downtown Experience on Friday, February 19 along with the 4WheelParts Youth races. Racing action starts early Saturday morning with two separate 250-mile races with motorcycles and quads racing in the morning followed by UTVs in the afternoon. Everyone is invited. Come join in the fun.”

Find a full schedule of events on the Best In The Desert website: https://bitd.com/race-event/2021-parker-250/