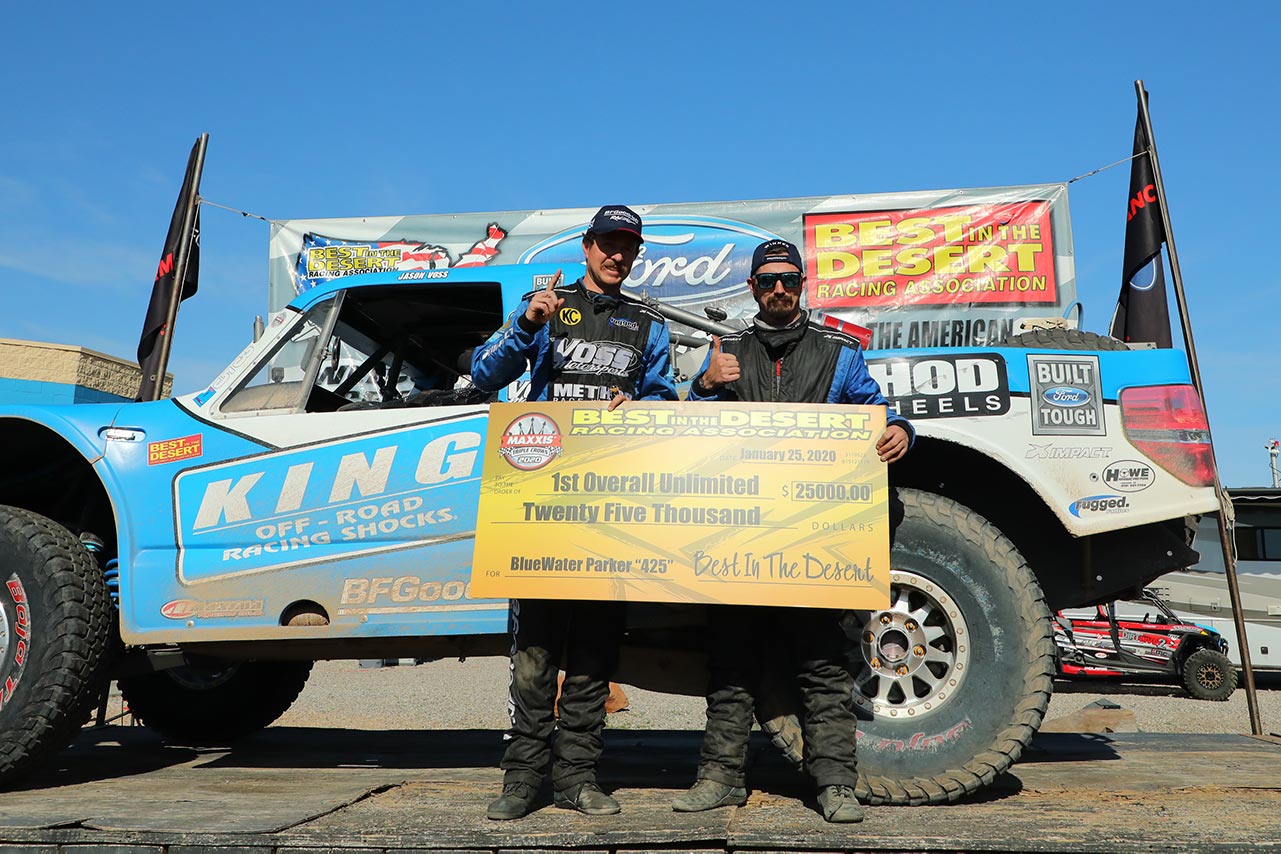 LAS VEGAS, NV (JANUARY 27, 2020) – Parker, AZ was once again the center of off-road racing this past weekend as Best In The Desert’s BlueWater Resort Parker “425” Presented by Jimco wrapped up with outstanding racer turnout, impressive race times, and the highest prize purses in event history. Beautiful weather and ideal conditions led to huge spectator numbers as well.

This year’s 425-mile race saw a new format for racing with classes split between two days, Friday and Saturday. Breaking the racing down over two days made for ideal conditions for both groups, Trucks and Cars, with racing between similar classes leading to fewer bottlenecks, less lapping of slower entries, and most everyone finishing in daylight hours.

Not only was the BlueWater Resort Parker “425” Presented by Jimco the start of Best In The Desert’s 2020 season for Cars and Trucks, but it was also the first round of the 2020 Maxxis Triple Crown Series. In the end, $51,000 of Maxxis Triple Crown bonus money was paid out on top of the regular purse and contingency making this year’s BlueWater Resort Parker “425” Presented by Jimco the biggest prize payouts in event history.

“What a way to start the new year of Car/Truck racing. This year’s event will go down in history as one of the best ever,” commented Best In the Desert Race Operations Mgr. Donald Jackson. “Going to the two-day format was very well received by the racers and fans. The action on the course was fast and furious with established stars and a whole host of new young racers all battling for class wins. In the end, the BlueWater Resort Parker ‘425’ Presented by Jimco lived up to its reputation as ‘The Legend Lives On’ and proved again to be one of the toughest and most prestigious races in all off-road racing.”

The BlueWater Resort Parker “425” Presented by Jimco started off strong on Wednesday with a record number of time trial entries, 122. Recognizable

racers included Harley Letner driving the #70 Kevin Thompson Trick Truck who set the fastest time by less than half a second over #35 Jason Voss while #41 Justin Lofton came in third and Robby Gordon fourth in the Trick Truck Class.

83 Cars and Trucks left the line on Friday and 84 started the race on Saturday with 40 entries in Class 6100 and 26 Trick Trucks. Friday action saw young racer phenomenon Connor McMullen get his 2019 Series title defense off to a great start with a win in Class 1000 which earned him $7,500 of Maxxis Triple Crown Limited Class bonus money. Not only did Conner take the Class 1000 win, he also earned the third fastest time for the weekend.

Other notable class winners included #6173 Kyle Jergensen who continued his remarkable streak of Class 6100 wins besting Ryan Hancock by just under eight minutes. Class 1500, however, proved to be the closest race of the day with eventual winner #1529 Brandon Bailey and #1532 Brian Parkhouse battling it out, never more than just a few seconds apart throughout the day. Bailey pulled out to a four-plus-minute margin at the end taking home the class win and $5,000 in Maxxis Triple Crown bonus money for his 3rd overall finish in the Unlimited Class. There is never a dull moment in Class 1500 racing!

Best In The Desert’s BlueWater Resort Parker “425” Presented by Jimco is one of the most demanding and prestigious races in the 2020 series. With challenging race features like the “Goat Trail,” Osborne Wash, and the Parker Python, the Parker “425” “The Legend Lives On” event is a race to look forward to every season.

For a full list of race results visit https://bitd.com/race-results/

The next Best In The Desert race, King Shocks Laughlin Desert Classic will be held in Laughlin, NV February 20-23, 2020 open to cars, trucks, and UTVs. UTVs will also compete in the special Baja Designs UTV Night Race.