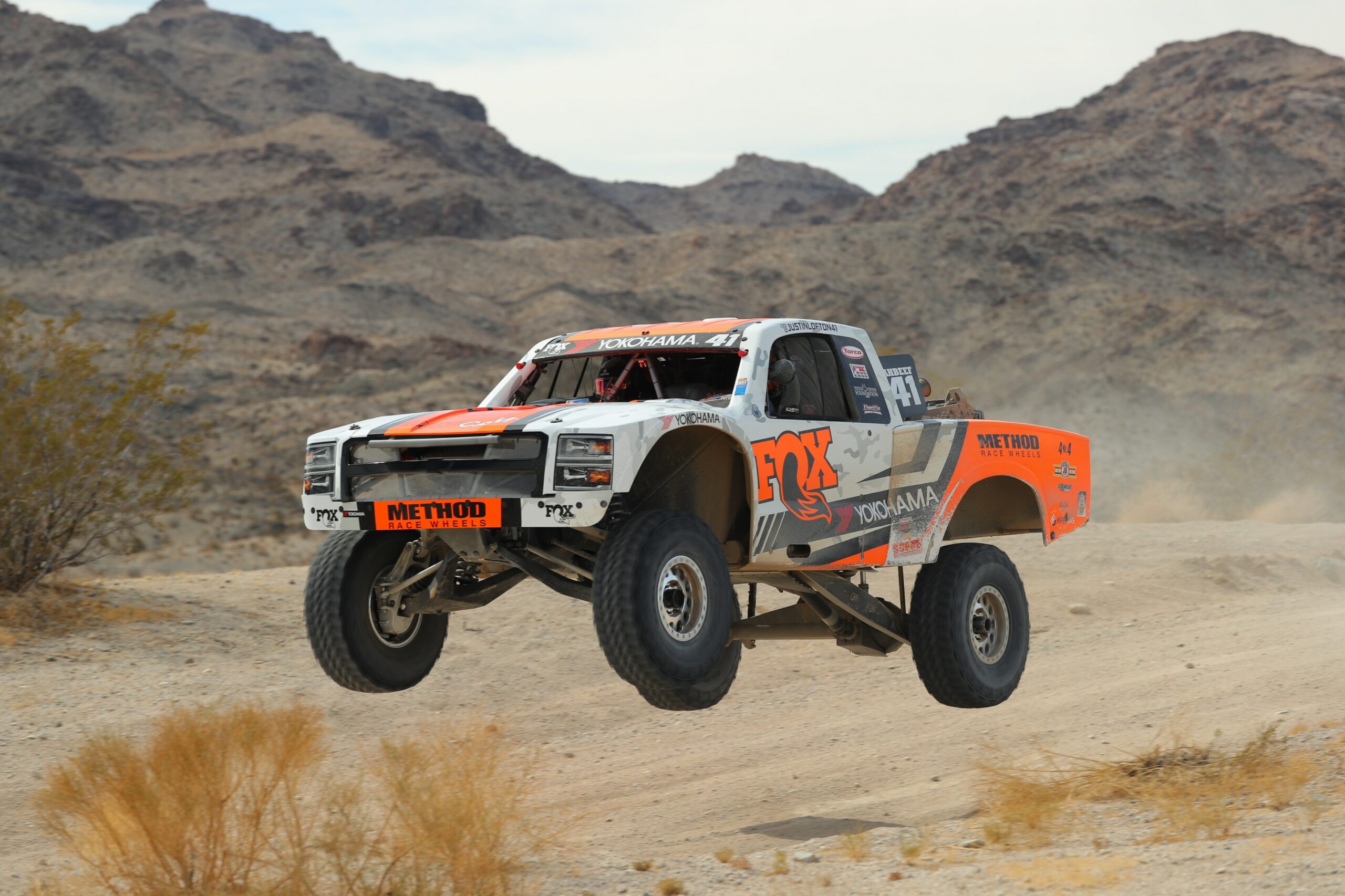 FOR IMMEDIATE RELEASE: LAS VEGAS, NV (September 27, 2021): The King Shocks Laughlin Desert Classic wrapped up over the weekend in Laughlin, Nevada with a spectacular display of off-road racing. Two full days of racing, double points to go toward a Best In The Desert Series Class Championship, and an ultra-competitive 17-mile semi-short course made for an exciting event for racers and spectators alike. 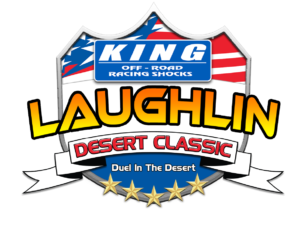 Thursday Sept. 23, 2021 started fast with Time Trials for Trick Trucks and Classes 6100, 6200, 1000, and 1500. The star-studded fields came down to seconds to determine who would start on the front row come Saturday. In Group A, Conner McMullen took the all-important pole position after finishing with a 3:19 lap time in his Class 6200 truck over Sam Berri in his Class 1500 car just six seconds behind and Nick Carolan right on his tail by a mere two seconds. Group B featured Class 6100 with Jordan Brenthel setting the fast lap in 3:28 followed by Mavrick Gaunt and Andrew Myers all separated by a single second showing how close the race would be. The final trial run would go in Group C featuring the Trick Trucks. Justin Lofton ended up taking the group in 3:18 with Harley Letner 4.8 seconds behind and Kyle Jergensen rounding out the top 3 finishers. Bj Baldwin, Tracy Graf, Adam Householder, Bill Apgood, and Steve Olliges made up the top eight qualifiers.

Friday featured the Best In The Desert Event Expo which brought racers and fans together including a very special young fan named Kimber Johnson. 12-year-old Kimber is fighting cancer and Best In The Desert set up a meet-and-greet with Bj Baldwin who took her on a special lap in his Trick Truck around the infield section. It was a very special moment for the racers, fans, and Kimber’s friends and family.

Racing got started Saturday Sept. 25, 2021 with four races scheduled for the day to determine the winner of each class. Sportsman/8100 Class ran first which many teams used as practice for their main event. Patrick Whitt Jr. in his Fusion-prepared truck finished his three laps in 59:42 to take the win with Preston Brigman and his team finishing second and Bret Jeffers rounding out the podium. Race 2 featured a mix of classes with the Chris Schweers/Cody Gregory/Trevor Barkley/Jon Schweers team taking the overall finish and Class 5000 win in 1:10:59. Second overall went to Troy and Jack Grabowski in their Class 5000 Truck while third overall and first in Class 4700 went to the Andrew Hulse-led team in 1:16:12. Class 1700 belonged to Steve Palmieri and team, finishing three laps in 1:05:40 while Class 1200 was taken once again by Chad Hall in his Chevrolet Performance ride, proving what can be accomplished with a stock truck. Other class winners from Race 2 included Class 3700 winners Chris Mortensen and Jerry Simonson and Class 7300 winner Melvin Wade who brought his Jeep home in 1:11:29.

Many fans and racers were waiting for Race 3 to see what would happen in Class 6100. A field of 25 trucks competed and, in the end, only 29 seconds separated first and fifth place after four laps of racing. Andrew Myers took the class glory in 1:04:19 with Mavrick Gaunt, Dustin Grabowski, and Jordan Brenthel finishing second, third, and fourth place, respectively. Fifth place in this class went to new racer Brent Fox finishing in 1:04:48 proving the tight competition in this group.

Race 4 on Saturday went to Class 6200 star, Conner McMullen in 1:03:52. McMullen led from the start but Nick Carolan kept him honest finishing only 48 seconds behind in second place. Third place overall and first in Class 1500 went to race-veteran Sam Berri in 1:06:54. Class 1000 was a freight train of a race with vehicles literally battling it out bumper to bumper. Preston Brigman eked out a win over Bret Jeffers by a mere 23 seconds with Peter Hajas coming in third.

The fifth and final race of the day came down to the Trick Trucks with Justin Lofton starting in pole position. From the green flag on it was a race between Kyle Jergensen, Harley Letner, defending-champ Adam Householder, and BJ Baldwin. At the finish, only 22 seconds separated the winners with Lofton in the front with 1:01:20, Jergensen in 1:01:28, Letner in 1:01:42, and Householder in 1:03:32.

The King Shocks Laughlin Desert Classic features a two-day racing format with the combined times from both Saturday and Sunday determining the final winners. While Saturday was filled with high-octane racing, it would be Sunday’s races that would put racers on the podium.

Sunday started with the same format of races with the Sportsman/8100 Class first. While many racers suffered DNFs, it was Preston Brigman who ended up taking the overall finish and Class win.

Race 2 started strong with the Schweers and team coming out and taking Class 5000 over Troy Grabowski and Zac Palmer. Finishing third place overall but first in the 4700 Class was Andrew Hulse with a time of 1:22:19. Finally, but certainly not least, was Chad Hall who came out on top again in Class 1200 finishing in 1:23:32. Other class winners of Race 2 included Melvin Wade repeating his win in Class 7300 and Chris Mortensen and Jerry Simonson who earned the Class 3700 win in 1:16:04.

Race 3 on Sunday was similar to Saturday’s competition with Andrew Myers going head to head with Jordan Brenthel, Dustin Grabowski, and Brent Fox to ultimately take the Class 6100 and overall win in 1:04:53. The final lap of the race saw Brenthel with a 20-second lead on combined time only to suffer from mechanical issues to put him out of the competition. In the end, the podium was led by Myers, followed by Grabowski and Fox.

Race 4 featured Class 6200 with Conner McMullen again proving he is hard to beat, besting Nick Carolan in 1:02:17 and taking the overall win for the weekend. In Class 1000 it was Bret Jeffers who came in first with a time of 1:10:21 beating Preston Brigman and Peter Hajas by seconds on the clock. However, by finishing in close second Brigman took home the hotly-contested overall win. Sam Berri took Class 1500 in 1:09:26 wrapping up the overall weekend win and getting him that much closer to a Series Championship win.

Sunday’s Race 5 was one to watch after Saturday’s heated competition. As the trucks went off the start line, it was Justin Lofton who burst through the hole shot with Kyle Jergensen right on his tail pipe. Kevin Thompson took the wheel in the #1 Concrete Motorsports truck but unfortunately a roll-over in the infield section caused a defeating delay while his truck was righted. Bj Baldwin started behind Thompson and had to restart as a result but drove hard and fast to ultimately take the Trick Truck Class win in 1:02:33, six seconds ahead of the #AHBEEF Justin Lofton team. In the end, however, the combined scores put Justin Lofton first overall followed by Jergensen in second and Baldwin in third who made up for Saturday’s fifth place finish.

“We couldn’t have asked for a better weekend of racing,” commented Best In the Desert CMO Bryan Folks. “The drivers loved the track and really enjoyed the racing format. The weather was perfect and the huge spectator turnout was much appreciated. The King Shocks Laughlin Desert Classic lived up to its billing as one of the most exciting races on the yearly calendar.”

“There is something very special about racing at Laughlin,” stated Best In The Desert Race Operation Director Jeff Phillips. “The town as backdrop, the beautifully prepared infield section, the banners and the crowds make for one amazing venue for off-road racing. Most of all our racers really enjoyed the experience. Without question, every racer was pumped about the experience of racing at Laughlin. Definitely another highlight of the race season. We look forward to seeing everyone in November at our season ending Bluewater Desert Challenge.”

Double points at the King Shocks Laughlin Desert Classic helped a lot of racers in the final Best In The Desert Series Championship. Unofficial race results can be found here while an updated list of season point standings will be available soon here.

The next and final race of the Best In The Desert 2021 Series will be the Bluewater Desert Challenge open to all vehicle classes in Parker, Arizona on Nov. 4-7, 2021. 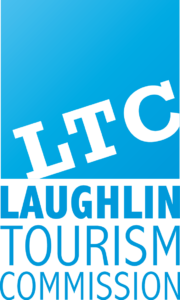