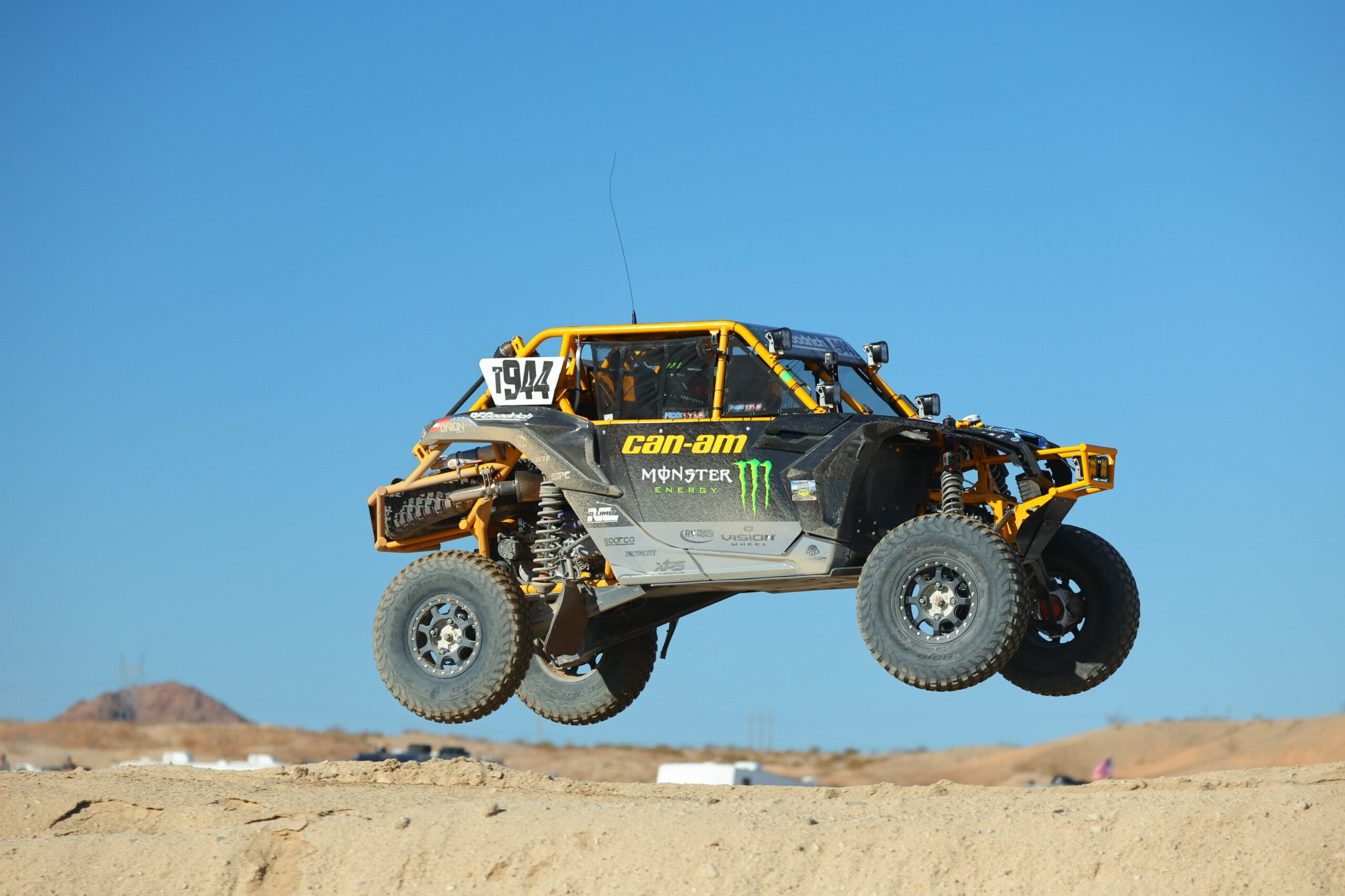 FOR IMMEDIATE RELEASE: LAS VEGAS, NV (Feb. 23, 2022): There’s never a dull moment at Best In The Desert and the 2022 racing season is in full swing. The Shock Therapy UTV Legends Championship Presented by Laughlin, NV finished racing over the holiday weekend and it was a great display of skill, grit, and a whole lot of fun.

Saturday’s racing started off hot with motorcycles taking off the new starting line at 6:30 AM with grand-prix style racing. JETWERKS provided live coverage of the race through the RYDE TV App which can still be watched here. The action will also be aired on the CBS Sports Network at a later date to be announced.

Dalton Shirey of 3Bros Racing and Factory Husqvarna dominated the field after lapping everyone minus two, finishing in 2:49 to take the Open Pro Class. The TM Designworks Hunter/Hintz team came in second place, narrowly beating the DT Racing/3Bros Newton/Trulove duo. Factory Beta racer Joe Wasson suffered an early mechanical issue but was able to finish fourth just off the podium while the hard-charging team of Broderick/Reynolds took the Open Expert Class and rounded out the top five overall.

The Over 30 Pro MC Class saw Robby Brockman as the winner with a top 10 overall finish while Jarrett Curley continued to exert his dominance in the Ironman Pro Class by beating out Laughlin local Ryan Marshall. Both finished in the top 10 overall as well.

Don Higbee rolled to the Quad Pro win, while the Goodwin family dominated the Family Expert Class aboard their Kawasaki KX 500. The Loppnow/Conway team led the Women’s Expert Class while Roy Black dominated the Amateur Class with overall amateur and Ironman Amateur.

Other notable wins included Nick Bazanos taking the Open Amateur Class; Tony Nolen in the MC Lites Expert Class; Jarrod Wheeler in the Over 30 Expert Class; Paul Palmer in Over 50; and Bill Cotton in Over 60.

Next up on Saturday were the highly anticipated UTV Classes: Trophy Unlimited, Super Stock, and Sportsman.

Garrick Lastra, Dan Fisher, and Chris Blais battled hard for the first half of the Trophy Unlimited race until Lastra and Fisher suffered mechanical issues giving Blais clean air to the finish in 3:18. Brayden Baker finished in second place while the Campbell, Watson, Herquist team rounded out the podium. UFC fighter Donald “Cowboy” Cerrone was competitive all day, ultimately finishing in fourth place with Trevor Leighton and Riley Riberio rounding out the top five.

Murphy Racing’s Eric Murphy took first in the Sportsman Class while finishing tenth overall. The podium in this class saw Jason George in second and David Holley in third.

The final race on Saturday saw the UTV Production Turbo and Production NA Classes battle it out.

Can-Am’s Phil Blurton came out on top in the end for Production Turbo but not without a serious fight. Young up-and-comers Joe Terrana and Jason Montes, racing their second season, passed Phil for the lead halfway through the race on their way to the win but suffered a flat tire on the last lap. Bruce Binnquist was also running up in front of the pack until he experienced mechanical issues while top racers Sierra Romo and Ryan Piplic likewise saw early car failures to keep them from getting in front.

In the end, the Production Turbo podium was Blurton, Terrana, and De Sousa Dias, respectively. Jason Murray was just off the podium finishing fourth, Evan Striplin and Ryan Morrison rounded out the top five, and Matt and Zach Burroughs took sixth place.

Polaris RZR’s Josh Row was back to winning form taking the NA Pro Class and a top 10 overall finish, with Max Eddy and Cash and Brian Shaleen rounding out the podium there. Ethan Groom finished just off the podium in fourth place but as a young rising racer, he had a solid finish.

Best In The Desert fans and racers love returning to beautiful Laughlin, Nevada as the backdrop for races. The UTV Legends Championship always sees tough competition and the winners of the 2022 challenge got some great racing under their belts and earned some points for the Series Championship.

The next Best In The Desert event will be the 2022 Adelanto Grand Prix in Adelanto, CA on March 17-20, 2022. Details and registration can be found on the event page: https://bitd.com/race-event/2022-adelanto-grand-prix/