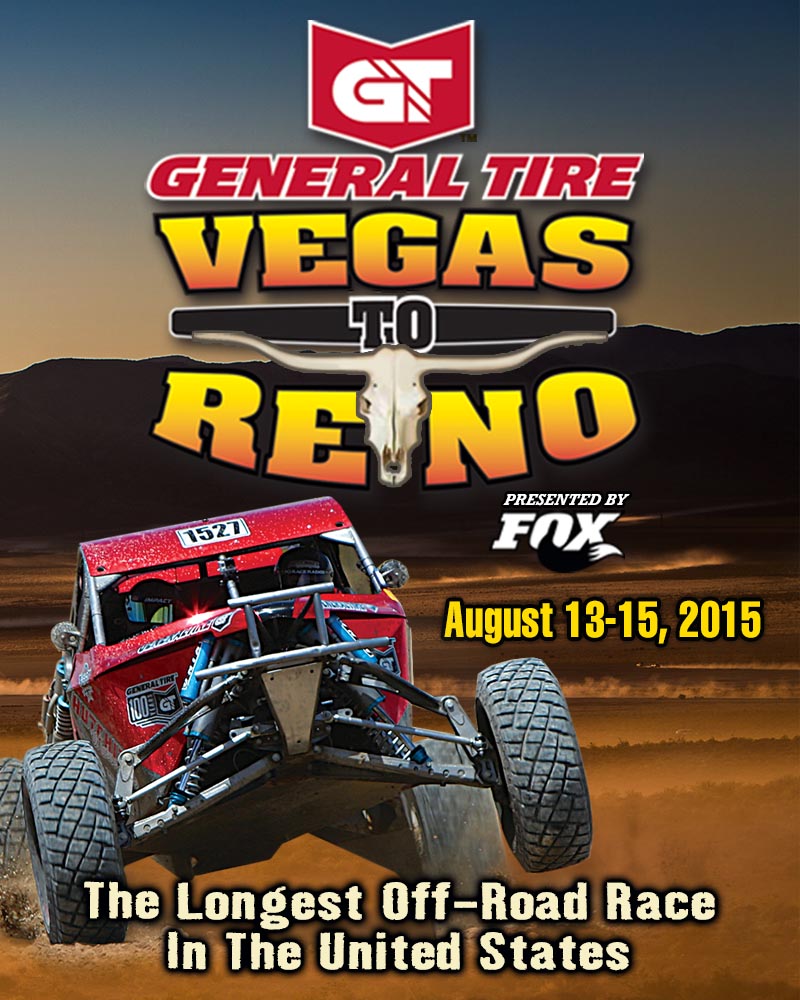 With just a few days remaining before the green flag drops on Best In The Desert’s General Tire “Vegas to Reno” presented by FOX, 333 race teams have signed up so far for the “Longest Off-Road Race in the United States”. The impressive list of entries includes 39 Trick Trucks, 24 Open Class 1500 Cars, 50 UTVs, 39 Ironmen Motorcycles and Quads, and 24 Class 6100 Spec-Engine Trick Trucks.
This year’s event celebrates 19 years for Best In The Desert promoting an off-road desert race in the U.S. over 500-miles long from Southern Nevada to Northern Nevada. This year’s race will feature an extremely challenging and adventuresome 545-mile point-to-point course that Casey Folks is famous for.

Racers from the U.S. and around the world are set to compete – with entries coming now from Argentina, Australia, Brazil, Canada, France, Germany, Ireland, Mexico, South Africa, Uruguay and 25 U.S. states.

The 2015 General Tire “Vegas to Reno” presented by FOX will start early Friday morning, August 14th near Beatty, Nevada, about 100 miles north of Las Vegas. First off the line will be the Motorcycle classes followed by the Quads. After a substantial delay for safety reasons, the Car, Truck and UTV classes will head out on their quest to reach the finish line and hopefully a victory. The race finishes south of Reno, Nevada in the town of Dayton.

Red Bull will be supporting contingency at the Aliante Casino & Hotel in North Las Vegas, and also at the finish line at the Dayton, Nevada Event Center.

The General Tire “Vegas to Reno” presented by FOX also represents the beginning of the second half of the 2015 Best In The Desert Season. With three races already in the books, the class points battles are really starting to take shape for the race to season class championships. Best in the Desert holds 6 races annually for their car and truck classes, attracting the leading off-road teams from around the world.

Top masthead photo inset of CJ Hutchins provided by MikesRacePhoto.com
Steve Strobel photo provided by KC HiLiTES
Gary Weyhrich photo provided by DirtFocus.com
Important notice:
THE USE OF DRONES WILL NOT BE ALLOWED AT ANY BEST IN THE DESERT EVENT. Please be aware, Drones are VERY DANGEROUS to the safety of all concerned, both people in the air and on the ground.