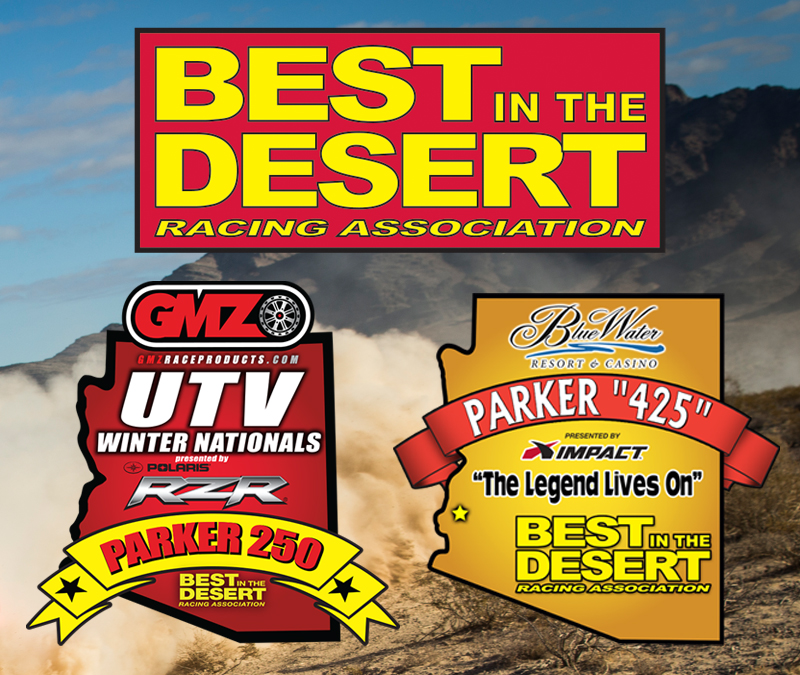 Best In The Desert Celebrates Outstanding Start To 2019 Season With Back-To-Back Events In Parker, Arizona

It’s been a great start to the 2019 race season for North America’s leading off-road racing organization, Best In The Desert. The GMZ UTV Winter Nationals Parker “250” Presented by Polaris® RZR held at the beginning of January welcomed in the new year in great fashion with a record breaking number of entries for the UTV, Motorcycle and Quad Classes. The event featured a weekend full of racing action that not only saw youth and short course UTV racing, but also the inclusion of Best In The Desert’s newly introduced UTV desert racing classes.

The GMZ UTV Winter Nationals Parker “250” Presented by Polaris® RZRwas followed by the BlueWater Resort & Casino Parker “425” Presented by Impact held January 31st through February 3rd. This legendary event kicks off the race season for Best In The Desert’s Car and Truck Classes. For the week, it seemed like the entire city of Parker, Arizona and the surrounding communities came out to witness off-road racing at its finest. The 11th annual “Parker Downtown Experience”, where race fans could view the Time Trials vehicles, talk with the racers, and enjoy the festivities, was the busiest it has been in years. The areas surrounding the race were packed with thousands of excited spectators taking in all of the action. The strong field of race vehicles included a record number of entries in the rapidly growing Class 6100 trucks for Spec Engine Trick Trucks as 47 teams showed up to take on the challenge of the famous Parker 425 desert course.

At the end of 425 brutal, rocky, and sometimes soaking wet miles as the skies opened up Saturday night, it was Brett Sourapas that brought home the overall win, followed by Cole Potts and Troy Herbst. Class winners for the BlueWater Resort & Casino Parker “425” Presented by Impact included:

With two races in the books for 2019, next up on the Best In The Desert schedule is the BFGoodrich MINT 400 powered by Monster Energy, March 6-10 in Las Vegas, NV, followed by:

Click on the covers below to view the GMZ UTV Winter Nationals or Parker “425” souvenir event programs.

Life is an Adventure.
Come Live Your Adventure with Best In The Desert…
THE AMERICAN OFF-ROAD RACING SERIES