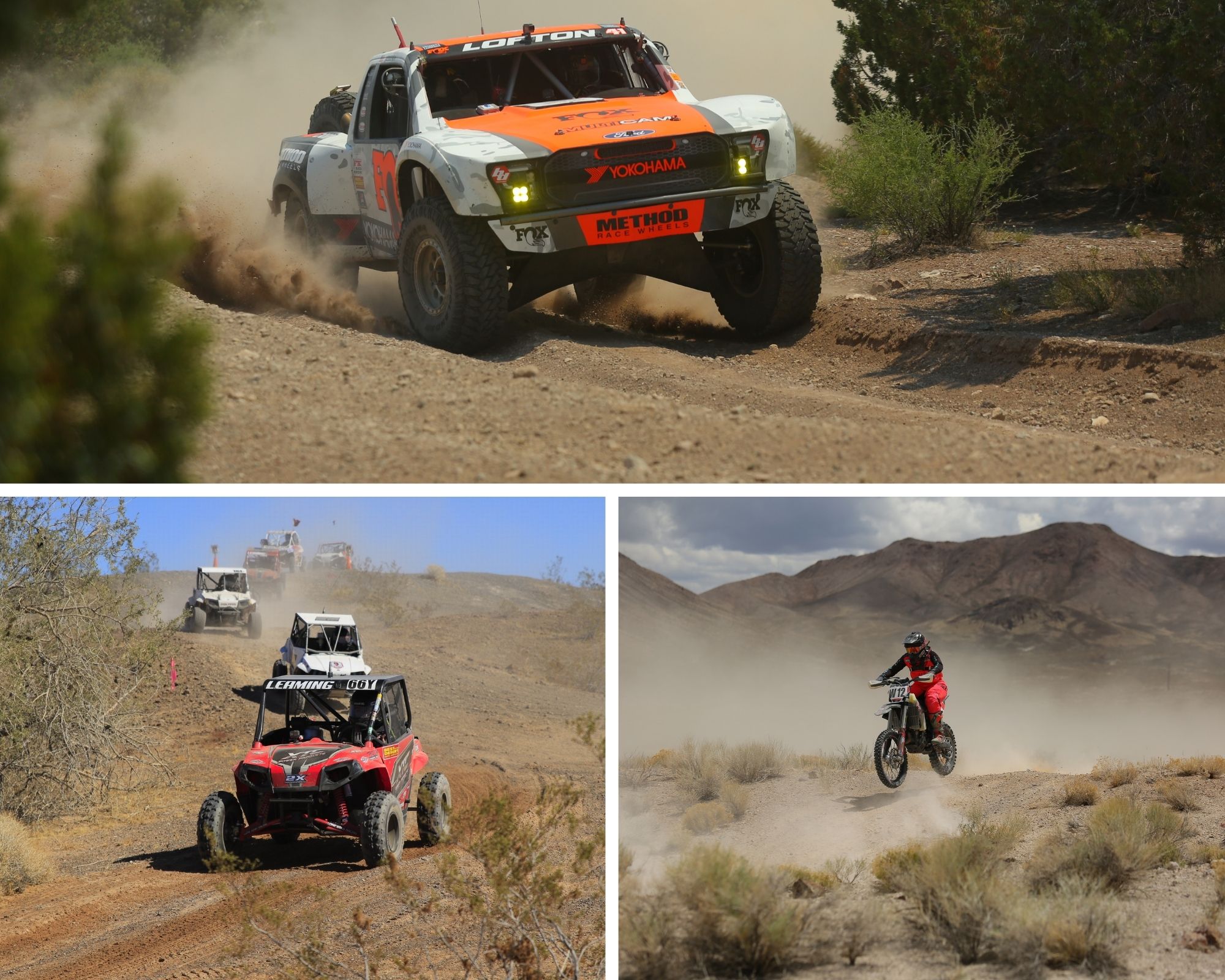 Families Who Race Together at Best In The Desert

FOR IMMEDIATE RELEASE (Aug. 2, 2021) The old adage is true that families who do an activity together, stay together. But families who race off-road together, often against one another, bring a new level of familial connection, collaboration, and enrichment.

Best In The Desert is an off-road racing organization that was officially established in 1984 with the World Championship Hare and Hound and the Las Vegas 300 by renowned off-road competitor, Casey Folks. As participation grew over the years, racers started to include their families which led to an even closer-knit atmosphere. By adding more events, expanding the vehicle classes able to compete, and a youth series, Best In The Desert became a place for the whole family and their vehicle of choice.

After Casey Folk’s passing in 2017, his sons Bryan and Daryl Folks took the reins, further solidifying the commitment to family for both the organization and racers. Since 1984 there have been plenty of generations racing in different Best In The Desert events. From the O’Hara family to the Olliges’ to the Alsups to the Aguileras, these families have been great Best In The Desert supporters and continue to make the organization what it is today by bringing the whole clan to races.

We caught up with some top names in their respective classes and talked about their families who they compete with and often against!

Randy Romo and his daughter Sierra have been racing in the UTV Pro Turbo Class in the Best In The Desert series for years now, against each other! The Romos have an ongoing joke that no matter what their starting positions are they somehow always end up close in standing.

At the 2021 Tensor Tire Parker 250 both started in the 30th positions and yet, Randy Romo ended in seventh place with Sierra right on his tail in eighth place, a mere 11 seconds behind. Even on the race course, they stay close.

“It’s one of the best experiences of my life, to race against my daughter,” said Randy Romo. “Sierra is such a talented driver, especially in such a male-dominated field. To compete with her at such high levels is a privilege and truly a bonding experience. She’ll be 21 in September and instead of going out with friends she often wants to work on the vehicles with me!”

Randy’s wife Claudia used to race as well but now watches her family rip around the desert while sharing a radio which comes with its own competition challenges. Randy will never forget the time at one of the Laughlin Desert Races when Sierra was ahead of him hitting some big whoops and getting some major air. Randy got on the radio to tell Sierra that she’d better slow down or her mom was going to kill her. Sierra complied only to see her dad’s #T974 red Polaris RZR fly by to finish ahead. She tends not to take her dad’s advice on the racecourse through the radio anymore.

And while the competition is mostly fun and games, it is often nerve-wracking to see a family member push the limits. Sierra recalls being behind Randy at the Parker 250 and seeing him get a little out of control over the whoops and flying off the course. Sierra stopped and ran down the hill to see her dad being pulled from the UTV unconscious. But as soon as he came to he yelled at Sierra to finish her race and he wouldn’t take no for an answer.

“It’s definitely tough to see my dad race as hard as he does sometimes,” said Sierra Romo. “I’m super protective of my parents so when my mom was racing with us it was extra hard, a blessing and a curse. I’m always wanting to help when my dad is having mechanical issues or gets in a crash. But I know I shouldn’t stop either because we are competing against one another!”

The Romos are now busy preparing for the 2021 Maxxis Tires “Casey Folks” Vegas to Reno Presented by Fox. Randy and Sierra have been testing the vehicles, pushing them to their max in the heat of the day and feeling more prepared than ever. Both Sierra and Randy do the entire race on their own which is an incredible feat! Make sure to keep an out for the Romos come Aug 11, 2021.

Rebecca and Rachel Stout are two female motorcycle competitors relatively new to the off-roading scene and already making quite the splash. Rachel went pro at 17 years old and was the first female to win the prestigious 2021 World Hare and Hound Championship on May 21-23, 2021.

The two sisters are planning to race on the same team again at the 2021 Maxxis Tires “Casey Folks” Vegas to Reno Presented by Fox with fellow female riders Ashlee Gage and Kari Erikson. Both Rebecca and Rachel have been riding their mountain bikes to prepare and learned a lot from last year’s race.

“I was really nervous before last year’s Vegas to Reno. There was so much hype and everyone was just trying to prepare us. It actually wasn’t as bad as I thought it would be!” said Rebecca Stout. “I raced a bike I’ve never ridden before, a 150 four-stroke so that took a little getting used to.”

“Last year’s V2R was super fun,” says Rachel Stout. “There were some super fast sections and even though it’s really long, it’s really rewarding once you complete it. I’m excited to know the course a little better this year which will help us put our riders on the sections they’ll excel on.”

The Stout sisters grew up riding dirt bikes with their family in the Utah mountains, spending their summers camping out and building trails. Their brother was the one who first decided to try his hand at racing and the sisters soon followed. The rest is history and now everyone tries their best to balance work, play, and competitions!

Even though Rebecca and Rachel will be on the same team at the 2021 Maxxis Tires “Casey Folks” Vegas to Reno Presented by Fox, they still compete by comparing times and mileage on their Strava apps. Rebecca won’t let Rachel forget she had a faster average speed at the Parker 250.

With three years between the sisters, the competition is fierce and comes with a healthy amount of trash-talking before events. But in the end, they love racing with and against each other and hope to take their team to the podium come August 11, 2021.

Justin Lofton is a household name in the powersports community. Competing in nearly every type of driving competition from NASCAR Trucks to ARCA to the Baja 1000 to winning a slew of Best In The Desert events, Justin has done it all and has done it well. But he learned it from somewhere!

Justin’s father Bob Lofton started racing in 1986 with his brother who owned an auto body shop in Brawley, California. The Lofton family grew up ripping around Placer City, a popular OHV area in Southern California; the Bud Light Dash races back in the day are fond memories. Justin learned a lot from his dad and his wealth of racing experience. He quickly caught on to how races play out, surpassing a steep learning curve around off-road racing.

Justin won Best In The Desert’s 2020 Bluewater Desert Challenge and tends to prefer the two-day races. He also gets nostalgic remembering the old Henderson 250 which Best In The Desert last ran in 2015. The Lofton team won that race three years in a row in their 1500 car. Racing with his family, even if it’s against his brother-in-law Wheeler Morgan, is something he loves.

“Racing with, and against, family is really fun,” says Justin. “You tend to hear a lot of people question why we do this, and spend so much time and money, but at the end of the day, it’s about sharing a passion and being supportive. It’s like, when you’re having a bad day you can cheer one another on and help out if needed.”

The Loftons are taking a break from Best In The Desert events after racing hard all last year. They recently picked up a new All Wheel Drive Mason Truck and are building it out which is keeping the #AHBEEF team plenty busy.

The Leamings are a true off-roading family. Chris and Becky Leaming own XTC Power Products, an industry-leading manufacturer of accessory harnesses, turn signal systems, and power control systems for UTVs and other off-road vehicles. To say they live the lifestyle is an understatement.

The Leaming family is out in the Arizona desert testing products and training with their children nearly every weekend. And their kids need to train to keep their racing momentum going! The youngest Leaming, Cameron, is 10 years old and on track to take the Best In The Desert 170Y Class Overall after only racing for a year.

Jaxon Leaming is competing in the 570Y Class and though he DNF-ed at the Parker 250, he’ll have a chance to make it up at the 2021 All Terrain Concepts UTV Legends Championship in the 4WheelParts Youth Series Event September 9-12, 2021. After winning third overall in the 570Y Class last year he is hungry to get back on the podium.

Of all the Leamings, however, all eyes are on 14-year-old Alexia. She’s currently in the running to take the 570Y Overall, won third overall in the 2020 youth series, and is consistently proving her merit as a competitive and super-tough racer. At the Parker 250 she went off the starting line in spectacular fashion, skimming sideways and rolling at least four times only to land upright and slam on the gas to finish the race. She’s hoping to go full desert in Class 1000 moving forward.

Chris Leaming told Best In The Desert that there are some big plans for the 2021 Maxxis Tires “Casey Folks” Vegas to Reno Presented by Fox. Alexia Leaming and rising off-road star Ruslan “Greasehandz” Yankilevich are planning on racing the race in its entirety in a 2021 Polaris RZR 4XP 4-seater in the Sportsman Class. While there are a good number of logistics to complete beforehand, they will be the youngest duo to race Vegas to Reno if everything goes as planned.

Chris Leaming started racing BITD in 2017 and would bring his family to his events. Alexia, being his first-born, was always his sidekick, his co-driver. But once all his kids were old enough, they all started to compete themselves. Being a motor-minded family like they are, everyone knows their vehicles inside and out. There are no plug-and-play operations in the Leaming household.

“All my kids have their own tool boxes. They put in the hours in and know that winning starts in the garage; they build their own cars, work on their cars, wash their cars, take care of their cars. Cameron can pull out a transmission and he’s only 10 years old. Off-road racing definitely helps with their self-confidence and self-sufficiency. It’s really such a valuable experience for each of them and keeps us close as a family.”

Chris was originally planning on racing the 2021 Maxxis Tires “Casey Folks” Vegas to Reno Presented by Fox but is now putting all his focus on Alexia and Ruslan and establishing sponsors like Walker Evans, GBC, Rugged Radios, Hi Lifter, and Assault.

The Leaming family may make history racing this year’s Vegas to Reno starting on August 11, 2021. Don’t miss it!

There are plenty of families that have stayed loyal to Best In The Desert over the years. They know the Folks family and the Folks family has watched racers and their families progress and get closer to one another over the years. It’s a tight-knit community and a long and storied history runs through every BITD racers’ blood. Each race solidifies the bonds between competitors and the next generation. To welcome newcomers and their own families is always a joy for Best In The Desert staff and racing veterans.